Two weeks ago I visited Cologne. I already blogged about the very impressive Kölner Dom but of course there is more to this city. I mostly went because of the Christmas market in Cologne. It might be a bit early to already start thinking about plans for next year around Christmas time, but if you like planning ahead you might already want to start considering going to Cologne at the end of the year! Seven different Christmas markets were taking place in Cologne and the nice thing is that each market has its own feel and look.

We arrived in the late morning on a Saturday in Cologne. After dropping off our suitcases at the hotel we ventured into town. We took our time exploring the Cologne Cathedral first and then it was time for a lot of Christmas related fun. The Alter market is the market in front of the Cathedral and a logical place to start. We looked around the many stalls which had everything from handcrafted woodwork to soap to anything you can eat (which counts for all seven markets really). Since we walked around here around lunch time we opted to have lunch at the market and bought (of course) bratwurst.

Next we spend some time walking through the shopping streets of Cologne since we were in town anyway. Enough shops around of great brands (and also a lot more unknown shops) so there are more than enough places to spend your money 😉 It is worth to pass by the store of Steiff as they have a beautiful Christmas display in their store windows made with all the different kinds of toys they sell. Via the main shopping streets we ended at the Christmas market at Neumarkt. We had a drink here and were introduced to the cute mugs of which the design is different for every Christmas market. Such a lovely idea to have different designs everywhere. After a drink we decided to head back to the hotel for a moment to check-in and get everything sorted out. Because it was nice to walk around the Christmas markets during the day but it only really turns magical during the evening.

When it was dark we returned to the Neumarkt. I think this turned out to be my favourite market. It was decorated so beautiful with the floating stars in the trees. Then we visited the Christmas market at Rudolfplatz. The entrance gate was lit up in different colours which gave a bit of a fairytale like feeling. We found lots of shops selling nutcrackers and snowglobes around which immediately gives a lovely Christmas vibe. Right next to this Christmas market is Christmas Avenue which is known as the Gay and Lesbian Christmas market. They had pink and purple stalls – incredibly different from any of the other markets but fun to walk around as they had live music here. We tasted roasted chestnuts as neither of us had ever eaten them but I’m not sure we will try it again, haha. They were okay but neither of us was blown away by the taste.

On Sunday we visited the other Christmas markets as it is simply not possible to do them all in one day if you want to have some time looking everywhere. We started at the Stadtgarten market which wasn’t very spectacular. It was nice but the others seemed to have something more special. So if you need to cut on some of the Christmas markets because you don’t have enough time to visit them all, I would say skip this one. Also because it is located a lot further away from the city centre than the others are so it saves you travel time as well. Luckily the other two Christmas markets that were left were as lovely as the first ones we visited. The Harbour Christmas market of course was decorated in the style of “fishing” and amongst other things they smoke their own salmon above the fire. The market at the Altermarkt was of course a Christmas market but also had an ice rink. I’m not much of an iceskater when it isn’t on natural ice, but it was fun to watch children going round.

It was a very fun weekend and I can definitely recommend visiting Cologne during the Christmas period. Has any of you been to a Christmas market before? Any you can recommend? 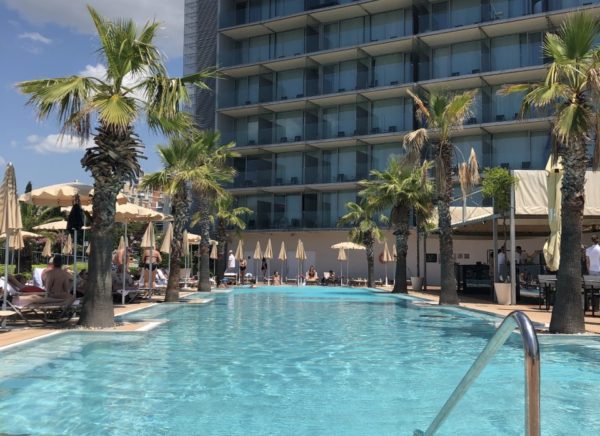